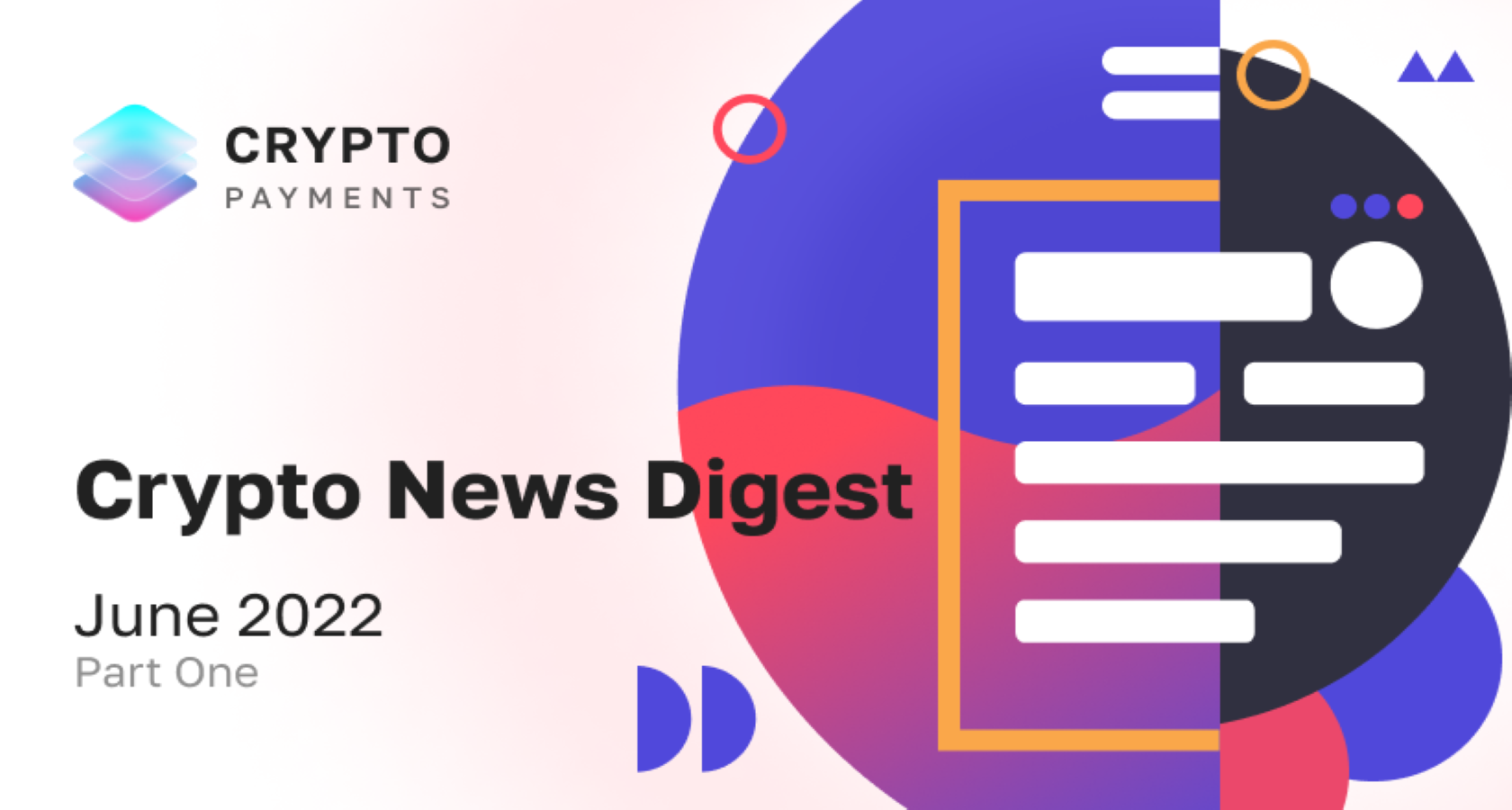 15.06.2022
Crypto News Digest — June 2022 (1/2)
Blockchain has been a hot topic for a while now and will probably remain popular for a long time. Everyone is constantly on about it, and sometimes it's easy to get confused in this information chaos. So we are going to help you.

From now on, CryptoPayments will provide you with relevant news from the crypto world. Look us up on social media platforms or visit our blog to get the news digest you deserve!

1. The Bank of Russia supported the idea of using cryptocurrencies for international settlements. Previously, the regulator was strongly against any use of cryptocurrencies.

2. The South Korean government will form the Digital Assets Committee to oversee cryptocurrency matters in light of the Terra ecosystem’s collapse. The regulator will provide exchanges with listing criteria, impose investor protection measures, and monitor unfair trading. According to the government, about 280,000 South Koreans suffered serious financial losses due to the collapse of UST and LUNA.

1. The Japanese parliament has passed a bill clarifying the legal status of stablecoins in the country. It sets a legal framework defining stablecoins as digital money and making it necessary to link them to legal tender such as yen.

2. DC Comics has launched its NFT marketplace. The publishing house expects to broaden its ecosystem and further explore various blockchain opportunities. The beta version of DC Marketplace is already live: the first few projects are available online, including the Bat Cowl Collection.

Abu Dhabi and the Abu Dhabi Investment Office are partnering with web3 identity platform Unstoppable Domains to give free crypto domains to all women living in the UAE capital. The initiative is supposed to increase the number of local women who participate in web3 and have complete control over their data and content on the web.

GRIT by Gala Games will be the first NFT Game released in Epic Games Store. GRIT is a battle royale game set in the Wild West, and it will feature user-owned NFTs, such as unique player avatars that are already available for purchase. The game will be released on Windows PC in late 2022.

1. Samsung has launched its official Discord server to support its Web3 activities and NFT distribution. The channel has been launched in partnership with Razorfish media company and will help deepen Samsung’s connections with fans, gamers, and creators.

2. The US Senate has introduced a cryptocurrency regulation bill. Two senators have presented a document demanding any crypto platform to be registered in the United States. The bill also proposes to classify any trading site as an exchange, which would also make liquidity providers fall into that category.

Mastercard has announced its collaboration with web3 and NFT platforms to enable the purchase of blockchain-based products via card payments. The company is planning to work with a number of marketplaces, trading platforms, and crypto services, which will allow it to further expand into the NFT sector.

85% of US merchants plan to adopt cryptocurrency payments, shows a study conducted by Deloitte and PayPal. 2,000 senior executives from US retail companies were polled in December. More than 60% of respondents expect to have $500,000+ budgets to enable crypto payments in 2022, and 52% plan to convert digital assets into fiat via payment services.

Lacoste has launched its NFT collection called UNDW3 («underwater»). The project’s goal is to provide a digital experience in the world of clothing based on the NFTs generated on the Ethereum blockchain. Lacoste will release 11212 of those, representing a number from the brand's signature polo shirt L1212.